This past Monday the community of Saugeen First Nation experienced a huge tragedy. Three churches were set on fire. One was destroyed and two were heavily damaged.

Wesley United Church, Saugeen was burnt to the point of destruction and the other two, the Church of Jesus Christ, a Mormon church on Scotch Settlement Road, and Saugeen Fellowship Baptist Church, on French Bay Road were damaged. One person is in custody and charges have been laid. The OPP and the Fire Marshall are investigating.

The church itself dates from 1834. It is located near the site of the last battle between the Ojibwe and the Iroquois. It was also the site of the signing of the treaty ceding most of the Bruce Peninsula to the Crown in 1854.

The church is surrounded by gardens and a massive stone amphitheatre started by the Band and The Rev. Earl Stotesbury, the church’s minister, in 1972 and finished ten years later.

According to Chief Anoquot, the church will be rebuilt. The existing brick walls will be brought down. The bell tower will remain and be part of a new structure. There is a community committee being formed. Input from Heritage Canada will also be provided.

If you wish to support the rebuilding project, you can make donations directly to the Band or through the Western Ontario Waterways Regional Council of the United Church.

Please forward your support by mailing a cheque payable to Western Ontario Waterways Regional Council with WesleyUCFire in the memo line, to: 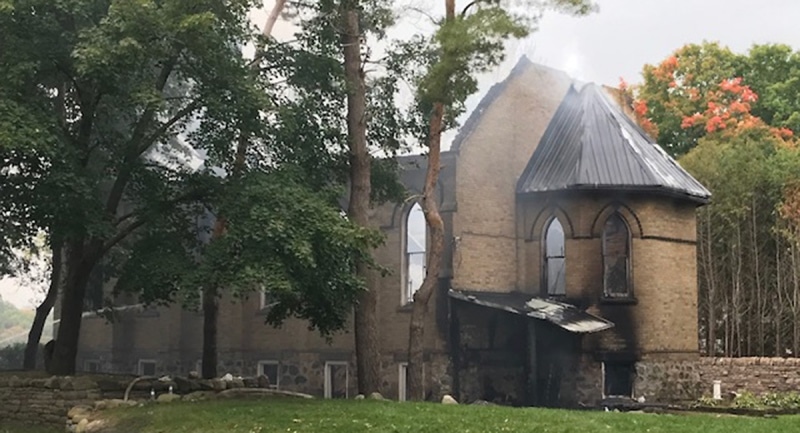